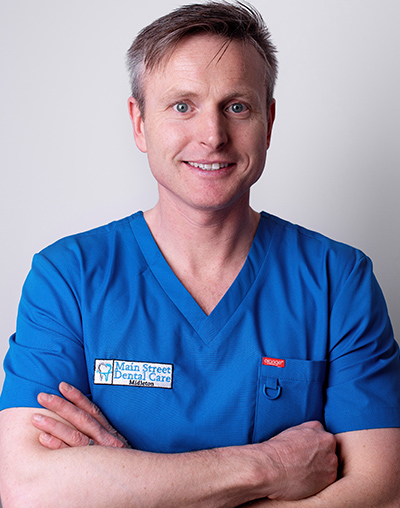 Niall qualified from University College Cork in 1999. Niall worked in private practice in London for nine years, before returning to Ireland with his family. He has worked here in private practice in Midleton since then. During his time in the UK, Niall gained his MFGDP qualification from the Royal College of Surgeons (UK). He also attended the prestigious

Eastman Dental Institute, University College London, a centre of excellence for postgraduate dentistry. In 2007, Niall completed his Diploma in Restorative Dental Practice there. He returned to the Eastman Institute in 2010 to complete his postgraduate certificate in Conscious Sedation and Pain Management.
Niall’s main areas of interest include root canal treatments (endodontics) and aesthetic restorative dentistry, in particular crown and bridgework all of which can be combined with sedation if the patient wishes.